When Harper’s pediatrician told me he may walk later because of his huge noggin, I really didn’t think he meant this late. I was thinking he’d probably start between 13 and 14 months. Haha…yeah…right.

Around his first birthday, I googled the normal age range for babies to start walking. It’s 9-18 months, ya’ll! That’s a huge gap! I also asked around to see when folks started walking in my and Benji’s families. Me and my siblings were late walkers. We all ranged between 13 and 16 months. (My sister was the only one who showed signs of walking early. That is until she broke her femur bone a little while before her first birthday and had to be in a full body cast for weeks.) Benji also had an uncle who didn’t walk until 18 months. After hearing this information, I just knew my baby bird was going to wait until the very last minute to start steppin’. Oh, my poor, poor back!

I was close in my guesstimate. He’s now 17 months (one month shy of the normal range) and he just recently started taking steps about a week and a half ago. His first real steps were on March 11th (my grandfather’s birthday). He walked for a golden coin. Yes, my son will walk for money.

He still prefers crawling to walking, but we’re getting there. Hopefully, this time next month, my lower back will begin healing from the past six months of toting 25+ lbs around. Halle-freakin-lujah!

so much depends
upon
a red wheel
barrow
glazed with rain
water
beside the white
chickens.

I know! This is the third post in a row that I’ve mentioned a poem. But I could not stop thinking about this one while we were at my Paw Paw Joe’s house this past week. We visited him on a Tuesday morning, and ended up staying there until Thursday morning due to some car trouble I was having.

It was an unexpected stay. I didn’t have anything aside from Harper’s diaper bag and a few snacks with me when I went, so during our stay, I just had to wash the clothes that we came in and throw them back on for the day – if you’re counting, I wore the same outfit three days in a row. Fortunately, Paw Paw did have a pack and play, so I didn’t have to worry about that. We did run out of diapers, but were able to get some more at a dollar store.

Paw Paw lives out in the country. The Mapquest app on my phone wouldn’t even recognize Belk, Alabama as a place. It kept trying to direct me to Belk (the store) in Birmingham. Since Paw Paw’s house is in the middle of nowhere, cell service was pretty hard to come by while I was there. If I got desperate enough, I could walk out by Paw Paw’s pond and get a signal.

I saw my situation as an opportunity to be still. And simple. It’s not very often that I get stranded at my grandparent’s house, with no possessions and no cell phone service.  It’s not very often that I get forced into a stillness like that. I tried to leave my phone alone, to not check my text messages, or the few social networking sites that I’m apart of…and that was hard. Harder than it should have been, honestly. It left me wondering why I constantly feel the need to be checking in on the virtual world. Something for me to think and pray about. But that’s not the point of this post. The red wheelbarrow is.

Since I was able to put the phone down and be simple for a while, I was able to enjoy some simple, but BEAUTIFUL things. Like the barn in my grandfather’s backyard that was built by his father who I never met, or a white bench under a giant tree, a pretty little bird house or some old broken down farming equipment. And my favorite…my grandfather pushing Harper around in a red wheelbarrow: 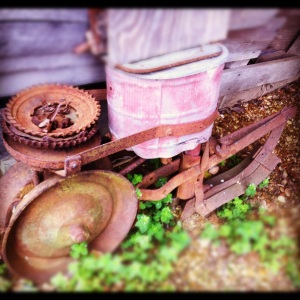 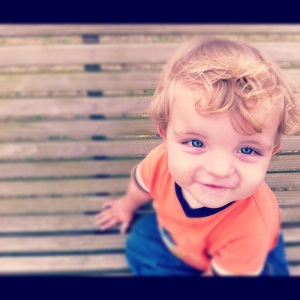 I’m so glad we got stranded 🙂