Everyone loves a good Justin Bieber reference, right? Jk. I know he’s annoying, but I just(in) couldn’t help myself. I needed an awesome baby related title because well…you know…I’m pregnant…with #3. Let’s pause and let that sink in for a minute. Number three. THREE. As in Benji and I will be outnumbered when this one gets here. That’s hella scary. And I know what you’re thinking. You’re rolling your eyes and saying to yourself “Ashley, you do know what causes this, right?!”  And yes…yes, I do know what causes it. BEARDS. Specifically beards worn by hot librarian husbands. Just sayin’!

In all seriousness though, this was unplanned. Again. Not that we didn’t want baby #3. We definitely did. But having just suffered a miscarriage in September, I didn’t think my heart could handle the roller coaster of emotions that come with trying to conceive a baby. With that being the case, Benji and I talked and decided that we would wait for a year before trying again.

And then BOOM! Pregnant. I found out three days after Christmas. I wasn’t even late, but I had this headache that I ONLY get when I’m a few days pregnant. After suffering from this hellish headache for 24 hours, I knew what was wrong. There was a fetus a growin’ in my uterus (said in a really redneck tone). I took a test even though it was way too early for a positive result…but sure enough two lines showed up. I hadn’t even told Benji I was going to test. He walked into the bathroom to find me laughing hysterically, like an insane person. He asked what I was laughing at and smiled when I told him I was pregnant. “Are you happy?” he asked. I think he was afraid that I had finally gone insane. I mean…I *was* in the bathroom completely alone, laughing to myself…and admittedly that’s kind of weird, but I WAS happy. Extremely happy and totally surprised. It was the perfect way to cap off the Christmas holidays.

I spent the next few weeks being really afraid of losing the baby. I’ve had two miscarriages now, and that puts me at a higher risk to have another one in the future. So while I was over the moon excited about our new little life, my excitement was dampered by my fear. It was a constant struggle. By about week seven though, I was tired it. I made a mental choice to start celebrating this baby. Even though I might lose it at some point, I decided to love and celebrate him or her while they were with me. I made my pregnancy public at that point so that people could pray for us, and hold me accountable. 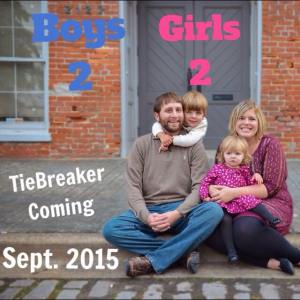 Surprisingly, it worked. Since making my pregnancy public, it has been much easier not to give into the fear. I definitely still have moments, just like any mother, but the moments are much smaller than they were. Now I’m more excited and joyful and I’m rejoicing over this new life! Whoop whoop!!

I had my first appointment on February 12th and everything looked perfect. The heart rate was 170 and measurements were exactly where they should be. We’re calling our baby Blobert for now 🙂 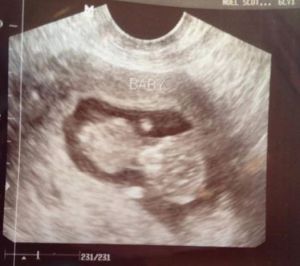 So far, I’ve felt pretty great. I’ve had some mild nausea, and some very strong aversions, but other than that, I cannot complain. With Harper, I was sick all day, every day, until 20 weeks. It was terrible. With Emrist, I was only really sick for about three weeks, but it was still torture. I seem to remember it going away by week 10 though. With this pregnancy, I haven’t even thrown up! I’m not sure what to think about that. Maybe my body has just built up a tolerance to being pregnant? Who knows, but I am SO grateful. Especially considering that I have two children and I work six days a week. Maybe this is just God’s grace to me ❤

Harper and Emrist are both pretty stoked. Harper gets it more than Emrist does, of course, but she seems to understand a bit too. She is really into babies, and told us this weekend that she wanted a little sister. Harper goes back and forth between saying he wants a brother and then saying he wants a sister. Honestly, I think he’ll be happy either way. He just wants a baby!

We won’t know what we’re having until September, as we are going Team Green this time. That’s right. We aren’t finding out the sex until the birthday! At this point, I don’t feel too anxious to know, but I’m wondering if I might be tempted to take a peak during the anatomy scan. I guess we’ll see. It should be in about 5 weeks.

Everyone asks if I have a preference, and truth be told, I do…but it’s not for the reasons you might think. Harper and Emrist have both been wonderful, so I would no doubt be 100% thrilled to have a boy or a girl. I really and truly would! But a part of me kind of hopes for another girl only because this is our last baby, and I think Emrist needs a close sister relationship. Harper has the type of personality that would do just fine without having a brother to be BFFs with – he’s sort of a loner anyways. But sweet Em…she is so relational. She needs that sister bond and when I picture our family a few years down the road, I just see that for her. A little sister to hold hands with and to share secrets with. I guess we will find out in September 🙂

Okay…that’s it for now. I really can’t believe I finally blogged. It only took 13 weeks! I guess I’ll see you guys again in about 2-3 months. Peace.